Home
Plasma cutting
How Does a Plasma Cutter Work?

Before you know how does a plasma cutter work, you need to know what plasma is.

Plasma is essentially the fourth state of matter, the other three being solids, liquids, and gases.

One of the best ways to describe plasma is by using water as an example. When water is cold it turns into ice.

If you heat up that ice, the water melts and turns back into its liquid form. Heating up the water even further results in the water turning into steam, its gas form.

If you take that gas and heat it up even further, this is when you get the plasma.

Plasma is essentially ionized gas that has positive ions and open electrons which makes there be no electric charge.

One weird thing that you might not know is that plasma is actually the most common state of matter in the universe and many of us may not even know what it is.

To put things into simple terms, the plasma arc that comes out of your cutter is formed when a gas is forced through the nozzle.

Gases such as oxygen, nitrogen, argon and regular compressed air work in this process. The power supply of your cutter then induces an electrical current into the gas, courtesy of your power supply, and the plasma is ready to cut.

The thing about plasma is that it can reach super-high degrees of temperature, allowing it to be able to easily cut through metal and other materials.

Components of a plasma cutter

A plasma cutter needs a power supply that is capable of converting AC voltage into constant DC power to be able to run the device.

One of the other most important parts of a plasma cutter is the arc-starting console. 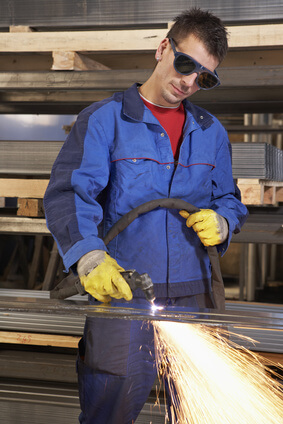 This part is extremely important as this is the system that starts the whole operation.

In order to get the unit up and running, this unit creates a spark which ignites the plasma and starts the cut.

Without a spark, the unit wouldn’t be able to ignite and the high temperatures needed to cut through hard metals would never be able to be reached.

The other main component of a plasma cutter is the torch itself. This torch has many different capabilities and a lot of functions are built into it to keep the unit in proper working order.

The torch is meant to align and cool down the swirl ring as well as the nozzle that is used in the operation.

Generally speaking, a plasma cutter can cut both thick and thin materials due to its high power and the high degree of heat.

How the device is actually used can differ depending on whether it is a hand-held or an automated system.

This device contains a trigger system that is used to start the cut when the trigger is squeezed. A power supply is created creating a DC current that flows into the unit and starts the gas flowing.

Once these two combine and create the plasma and enough pressure is built up within the unit, then a part called the electrode and nozzle are forced apart, creating a spark.

This spark starts the flow of plasma out of the unit and allows you to be ready to make your cut.

When you release the trigger, the airflow stops which in turn, will stop the flow of plasma and stop your cut.

In a regular welding shop, air is almost always the gas that is used to make this system possible.

These systems will create a plasma arc that uses something around 12-20k amps per square inch in order to create a good-quality cut.

The only issue with these plasma cutters is that they aren’t quite as accurate at this amperage and using this type of gas. It may take one or two cuts to get a perfect cut, but generally, these machines work quite well for the price.

Hand-held units can be expected to be able to cut steel that is as thick as 1.5”

These types of systems are most often used in large shops or commercial or industrial businesses.

Often, these are used in automated processes as well where no humans are involved and the least amount of errors can occur as a result.

These machines will generally use between 40-50k amps per square inch in comparison to their lower priced counterparts.

Another difference you will find in these units is that they are often powered by a gas that is of a high purity, like nitrogen, oxygen, argon and even hydrogen.

Some of the computer-based plasma cutters on the market are capable of cutting steel that is 6” or thicker.

After reading this article, you should have a better grasp as to how does a plasma cutter works.

If you own a plasma cutter or you are thinking of buying one, it is a good idea to look at a diagram in order to be able to visualize some of these technical terms and see what they actually look like on a unit.

It is amazing just how hot these units can get, it is definitely something that you need to be careful with.

Always make sure that you read the instruction manual that came with the unit before attempting any cuts as things can vary from unit to unit.

What are other people reading?